The evolution of the game controller has been a long one. From the very first days of gaming when it was essentially a case of having a couple of buttons and a joystick if you were lucky, today’s are light years ahead. With customizable controls, haptic feedback, and the rest it’s hard to imagine they could get more sophisticated. But that’s to overlook the fact that, before very long, we could be looking at games that you can control with brainwaves alone. It might sound like one of the furthest reaches of science fiction, but it’s far closer to being science fact.

In fact, so-called neural interfaces (which use our brainwaves to control machinery and mechanical devices) have come on in leaps and bounds in recent years. A prime example of the technology being used successfully is in the field of prosthetic limbs. According to a report in sciencedaily.com, a number of patients in Sweden have been able to use the technology to not just control artificial arms and hands, but also to receive the feedback of touch through their fingers.

Moving to the gaming arena, while the principle remains the same, the tech needed to make it happen is slightly different. This is because, initially at least, it will be an electroencephalograph (EEG) headset that controls the game action.

Within the headset, there are a series of electrodes placed at strategic positions around the head which pick up electrical impulses from brain activity. These include the “thoughts” that the player is having to control the action on screen.

When it comes to controlling a game, different brainwaves can trigger different tasks. Because a set number of thoughts and feelings generate identical patterns in the brain from person to person, this means the developers can link up the exact type of brainwave to generate a particular event in a game. 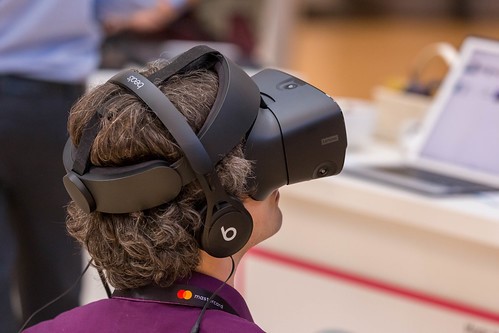 Of course, this sort of technology is likely to extend beyond gaming into areas like online casinos. This is a crowded sector with sites like bonus.ca boasting many different operators all seeking to offer a competitive advantage. Most do this by offering a wide range of games as well as generous welcome bonuses. But the added appeal of mind-controlled play could be just the edge that some need.

Already some video games are being developed that are using neural controls, but it’s something that is still very much in its infancy.

Its natural partner is very obviously virtual reality gaming and it shares something in common with this. That is that both require the hardware, i.e. the headsets, to become available and affordable for enough people before they will really catch on. So just as the development of the Oculus Rift proved to be a watershed moment in VR, we could soon see a similar breakthrough from an EEG manufacturer like emotiv.com.

As to when it might be, that’s still open to debate. But the one thing that is almost 100% certain is that it will be here before we know it.