Fallout 4 is one of the most popular and well-received games, with one player threatening to sue Bethesda over a three-week Fallout 4 binge that cost him his marriage and job – but that’s another tale.

We enjoy Fallout 4, especially how customizable it is; you can tailor your weapons, armor, and Power Armor (we know this is the American spelling of armor, but it’s how it’s spelled in-game!) to your preferred gameplay style.

You’ll come across some devilishly powerful monsters out in the wastelands. If you’re lucky, you will meet various companions in the wasteland and team up to fight powerful monsters, so keep your armor in peak shape if you want to survive the encounter. Whether you run into a Super Mutant Suicider or a Dusky Yao Guai, they will almost always deal some damage or entirely destroy some elements of your Power Armor.

If you need to repair your fantastic suit, the good news is that it’s quite straightforward. This is a simple guide on how to repair Power Armor in Fallout 4. You’ll need to remember this one because you’ll be mending it a lot during your Fallout 4 adventure. 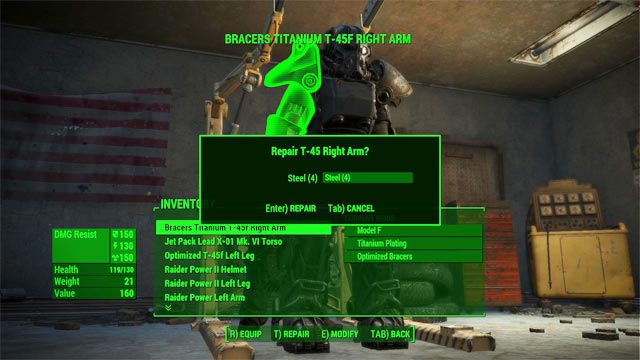 How do I repair power armor?

You can repair power armor by following the steps below:

Use the crafting menu

As you approach the Power Armor Station, a prompt to access the Craft menu should appear at the bottom of the screen if your Power Armor is close enough. Select it by pressing the corresponding button on the Xbox One, PS4, or ‘E’ on the PC.

Find the power armor pieces that need to be repaired

If everything went as planned, you should now see a menu showing your Power Armor piece by piece. Scroll through the list in the Health bar left to find a broken item. Once you’ve located it, use the Repair button (Y/Triangle/T for Xbox One/PS4/PC).

It’s crucial to keep in mind that different repairs will require different parts. Although steel is required for all Power Armor repairs, more complex Power Armor may require using rarer materials (such as circuitry and nuclear material) before it can be repaired.

The required resources will be displayed when you try to repair a portion. If you’re willing to sacrifice the given materials, confirm the repair, and your Power Armor will be repaired. Rep with any additional damaged pieces until your Power Armor is as good as new. 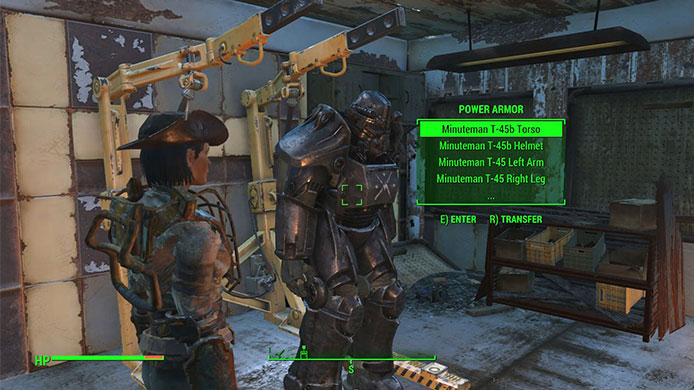 You must invest a few points in the Blacksmith, Science, and Armourer to make the greatest Power Armour upgrades! Perks. As a result, you can improve the base stats of pieces by moving between a few models. When the entire suite is outfitted with a comparable material mod, selecting a material mod will confer certain features.

Fallout 4 is an amazing game, and the power armor is an important asset in the game. Once you have all the necessary components, proceed to initiate the repair, and the selected Power Armor portion should be as good as new. Now that you’re fully back in the game, you can start traveling the wasteland again, confident in your fully functional armor suit.

1. When should you use Power Armor Fallout 4?

When carrying weight exceeds the carry weight restriction, players should consider employing power armor if a suit is handy. The power armor continues to function even when no armor is on it, allowing players to use it for two additional effects: circumventing the carry weight limit and falling from great heights without dying.

2. Will Power Armor stay where you leave power armor?

While you can leave Power Armor practically anywhere and return later to collect it, your map only tracks the last outfit you abandoned. So please keep track of where you leave your suits, or drop them off at settlements for convenience.

3. How many power armors can you have in Fallout 4?

The T-45 power armor was the first armor produced for military and, to a lesser extent, civilian and commercial use. During the quest When Freedom Calls, it is frequently the first outfit met in the Commonwealth. When compared to more advanced rivals, it is quite weak.

4. Can you recharge fusion cores?

There are currently only two ways to refuel a Fusion Core in Fallout 76. The first method is to employ the Electric Absorption perk card. Electric Absorption is a legendary perk card that can be obtained in the game. To access it, your character must first attain level 50.

5. Should I bring power armor to Far Harbor?

Power Armor is adequate. The only time you have to go underwater (if at all) is when you have plenty of time to remove your suit. Because there is a LOT of radiation on the island, a suit of power armor comes in handy when investigating. There are also a few new sets with unusual paint treatments on the island.