Nintendo Switch is performing exceptionally well since its launch in March 2017 and went on to be one of the fastest-selling systems ever. The game array for this mobile console has made it extremely popular, leading it to sell more than 55 million units.

Thanks to Nintendo Switch, you have plenty of options when it comes to accessories and gameplay styles. You can play it in tabletop mode, handheld, and even on the big screen.

The Nintendo Switch’s included Joy-Cons make the system easy to enjoy, but there are plenty of other great controller options to enhance your play experience either at home or on the go, including the official Nintendo Pro controller which is still the best Nintendo Switch controller for the console overall.

But if you’re looking for an inexpensive Switch Pro alternative or just need something for your player two, from high-end gamepads to retro controllers for classic platformers, we’ve listed the Switch’s most popular controllers to help you find the best pick for your playing style.

Before we go through these controllers one by one, let’s try to understand some of the Switch controller’s features and parts which we will talk about in this article. This will help you grasp the specification of every controller and picking up the right one according to your preferences. Definitely, most of you already have a great idea of all these, but there may be few people who need this.

Let’s have a look…

HD Rumble — This is Nintendo’s new gimmick: being able to feel specific sensations through the Switch’s controller.

Motion Controls — This feature utilizes the gyroscope in the Joy-Con and the Pro Controller for the Switch and lets the players rotate their device for movement.

Amiibo — is a toys-to-life platform by Nintendo, which was launched in November 2014. These toys use near field communication (NFC) to interact with supported video game software, potentially allowing data to be transferred in and out of games and across multiple platforms.

Nintendo Switch Dock —The main function of this device is to provide an output to the TV, as well as charging and providing power to the system. 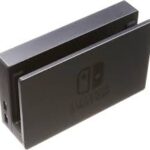 D–pad — (short for a digital pad or directional pad; also known as a control pad) is a flat, usually thumb-operated, usually digital, four-way directional control with one button on each point, found on nearly all modern video game console gamepads, game controllers, and on the remote control units.

Joy–Con Grip— Every Nintendo Switch comes with a Joy-Con Grip, an accessory that holds two Joy–Con controllers in a form factor that resembles a standard gamepad. The Grip that’s included in the Switch box is opaque, with a matte gray finish.

Analog stick— is a variation of a joystick, consisting of a protrusion from the controller; input is based on the position of this protrusion in relation to the default “center” position.

Now that we have a pretty good idea of a Switch Controller’s parts and features lets go through them one by one: 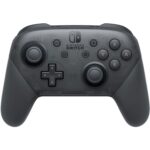 You love to spend most of your time with the Nintendo Switch in its dock, but a small Joy-Con grip can create disruption to take the full pleasure of the game you most like. That’s the case that you should get the official Switch Pro Controller if you have a budget. The Switch Pro is a great buy for most players in terms of ease, working, and features.

Though a bit expensive but Pro Controller has the best ergonomics among its competitors’ first-party console video game controllers. Its large face buttons are easy to click, triggers are well-shaped, and analog sticks, just make it perfect fit into your hands allowing better control during intense gameplay.

Features that stand this official pro controller out of the crowd are: Amiibo support, HD rumble, and motion controls (you don’t have to switch to Joy-Cons for certain Switch games); All these advantages make it work brilliantly for most Switch games.

It’s got great battery life too, allowing you to play wirelessly for almost 40 hours before the next charge. Perhaps this is the best battery life of any controller. And definitely it comes with a charger and a USB charging cable.

Though D-pad isn’t the best for traditional fighting games, there’s no doubt this first-party Pro Controller is one of the best Nintendo Switch controllers and one of the best Switch accessories you can buy. 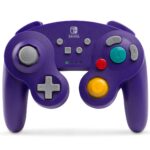 GameCube style controllers are generally considered the preferred way to play games like Super Smash Bros Ultimate, and PowerA is offering the same. PowerA GameCube-style Switch controller designs a larger D-Pad and extra left shoulder button which gives you an edge when playing against other players. It uses Bluetooth and 2 AA batteries allowing you to play Switch games wirelessly for up to 30 hours. An LED comes on for low battery warning.

It Does not support HD rumble, IR, or Amiibo NFC but it includes motion controls.

If you like games like Super Smash Bros Ultimate, Animal Crossing, New Horizons, and The Legend of Zelda; then the PowerA GameCube-style Switch controller is a nice choice. 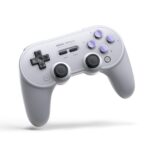 If you have a subscription to Nintendo Switch Online, you already have access to more than 70 classic NES and SNES games.

What are NES and SNES?

This is the perfect controller for the longtime Nintendo fan as not only it looks like the original Super NES controller but it also allows customization for button mapping, analog sticks, trigger inputs, and vibration adjustments. For up to 18 inputs you can even create a macro. Macro is a small program in which you can map up to 18 functions against only one button press. Though all of this customization has to be done on a computer, 8Bitdo’s software is very cool to use.

It allows you to play wirelessly for up to 20 hours using an internal battery pack and Bluetooth. Certainly, this battery life is relatively short than the other controllers we eyed at. But it is not a problem at all if you charge it during your game sessions. 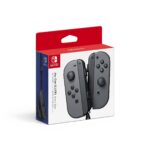 The Nintendo Joy-Cons is still one of the best Nintendo Switch controllers, making new kinds of gaming possible. Certainly expensive, but technically these are two fully functional controllers which can be used independently in each hand, or together as one game controller when attached to the Joy-Con grip.

They can also attach to the main console for use in handheld mode, or be shared with friends to enjoy two-player action in supported games. Each Joy-Con has a full set of buttons and can act as a standalone controller. Each includes an accelerometer and gyro-sensor, making independent left and right motion control possible.

You can choose your favorite color combination from vast available options. 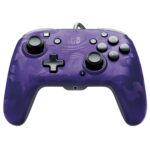 PDP Faceoff Deluxe+ Controller is a great alternative to Nintendo Switch Pro Controller with almost at one-third of the price with the compromise that it is a wired controller, but you have plenty of room to play with ease with the 10-feet wired connection, and you don’t have to worry about its battery dying. We can say it the best budget Switch, Controller.

It holds the similar features as Nintendo’s Pro Controller, plus a few extra as 3.5mm audio jack supports in-game audio chat, and adjust volume on-the-fly using the D-pad on the controller. It also allows you to customize your gameplay with dual programmable fantastic paddle-style back buttons.

You can map any button to these paddles, and it is incredibly useful for games that assigned sprint to a face button. The only drawback of these buttons is that one can hit paddles by accident in some cases.

These things make this PDP pad very close to Nintendo’s Pro controller if it doesn’t beat that. 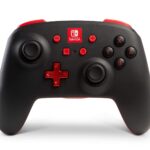 Though it isn’t as good as the Pro Controller, it is economical and offers many of the functions anyone desires. There are no features like HD Rumble or Amiibo NFC support as the Switch Pro controller has, but it includes motion controls.

It’s one added feature is the two additional “Advanced Gaming Buttons”. If you want these buttons to run the function of any other button, you can quickly customize. You can also program them to alter a specific game.

It’s also quite a bit lighter as it contains standard AA batteries instead of the internal built-in battery pack found on the Nintendo Pro Controller. So you don’t have to trash the controller once the battery stops holding a charge.

For those who want inexpensive Controller and don’t care to use Amiibo or HD Rumble while playing, it’s the best choice. 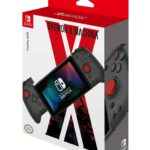 If you don’t like the feel of standard Joy-Cons, the HORI Split Pad Pro is a great option for you. They slide right into the same slots on the side of the console, providing enough extra material to easily fill your hands and make the button placement comfortable to interact with.

The analog sticks provide accurate results and a softer touch. The Switch with Split Pad Pro attached easily fits into the dock. The D-pad is bigger and outstanding.

Let’s look at the downsides… these Joy-Con replacements won’t work remotely and can only be used in handheld mode — it doesn’t support rumble or motion controls leaving you to miss out some specific features in some games like The Legend of Zelda, Link’s Awakening, and Cadence of Hyrule — and one more thing is it doesn’t support different Joy-Con options, so It’s not compatible with the Switch Lite.

In spite of these few drawbacks, the bigger size of the Split Pad, larger D-Pad and buttons won’t let you go back to Nintendo’s official Joy-Cons, especially someone with bigger hands. 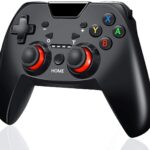 If you want to enjoy the game with a GameCube-style controller, then you have to spend more on Nintendo’s USB adapter or a third-party adapter. But wait for a minute…  PDP’s Wired Fight Pad Pro Controller with the standard analog stick on the left and smaller C-stick on the right and similar face buttons resembles a classic GameCube controller. To switch to the games that standard GameCube controller doesn’t support, shoulder buttons and triggers on both sides are available.

The Fight Pad Pro’s grips are longer than the GameCube’s, making for more comfortable ergonomics that fit fine in the palm of your hands. Lastly, you’re able to replace the C-stick with a proper GameCube-style analog nub. It also has a 10-Foot USB cable for plenty of room to play with ease.

The Fight Pad Pro is primarily designed for Super Smash Bros. Ultimate and Mario Kart in mind, and it works great for them but it doesn’t include motion sensors like the Joy-Con or Pro Controllers do. 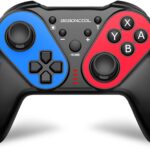 Beboncool has all the Nintendo Switch Pro controller’s features that most of the third-party controllers usually do away with. For instance, vibration, motion control, and NFC Amiibo functionality.

Beboncool Switch Pro Controller supports most of Nintendo Switch games and the latest version of switch console. It adds a Turbo button to customize any of the X Y A B buttons to free your fingers and destroy the enemy with one press.

Its quality and performance pay you back the value for your dosh. 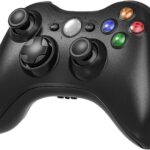 It connects to Switch console via Bluetooth and takes two hours to be fully charged and allows you to play 7 to 10 hours continuously until the next charge.

The availability, prices and other details of these products which are described in this article might be subject to change any time, so prior to make a purchase, please be sure these are still in effect.